Email Alerts
Are you looking for a classic wooden boat to buy? We offer many choices from Chris Craft, Hacker Craft, GarWood and others in all conditions from project boat to turn-key.

I recommend you sign up for the antique boat Email Alerts in order to stay informed of our offerings. Simply type your email address in the box below. You will receive a picture, price and description of each new classic boat we add to the web site within minutes of the listing going live.

How Do I Get My Classic Boat Home?

Ok, you bought it, so now what? Never fear... Mitch delivers! He will also give you a crash course on basic antique and classic boat operating proceedures.

Can I Have it Varnished Before Mitch Delivers?

Yes, if you allow for some lead time. The earlier you reserve your spot in the shop, the better.

Why not have us put a new gold leaf name on the transom, take care of any maintenance details and get your chosen boat ready for Summer delivery?

How Much Maintenance is Required for a Wood Boat?

If you keep your boat out of the sun when not in use, your exterior varnish should be good for 3 years if you use the boat twice a week. Interior varnish lasts much longer, as it does not receive as much direct sunlight. Revarnishing involves removing all the hardware and crash padding (if any), sanding, fixing any proud bungs or broken screws, and generally adding about 3 coats. The actual varnishing only takes 1-2 hours per coat, but the hardware removal, sanding and hardware installation takes around 70 hours. If you want to learn to do this yourself, we are happy to give you some guidance. Of course, you can always have this maintence done in our classic boat restoration shop.

The somewhat rare 21' Chris-Craft Capri is proportionally the same as the more available 19' Capri, but with roomier cockpits and longer decks.

Chris-Craft produced more of the 19' model, probably because it was a bit more affordable and easier to fit in the not-so-big garages of the 1950s.

The entire hull is planked in Philippine mahogany. The blonde engine hatch, king plank, dash and interior ceiling boards are bleached and stained with cordova colored filler stain. Cordova has a bit of yellow pigment, but varnish itself has a golden color, and the blonde color will develop as varnish coats are added.

The Corvette inspired wrap-around windshield is distinctive to this model and is still being produced in California. The windshields for the 19' and 21' models are not interchangeable. 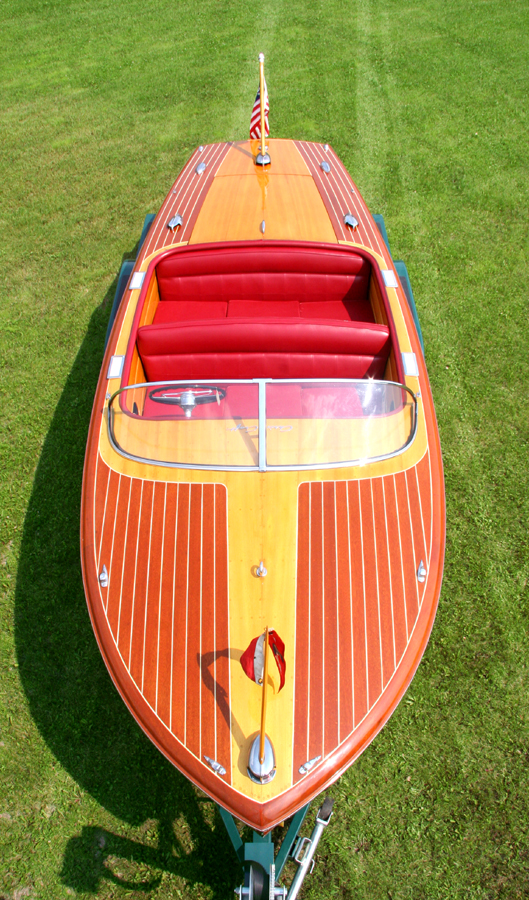 The deck hardware on the above 1955 Capri is original, except for the two chocks midway back on the front deck, and the two chocks at the aft corners. The chocks by the bow light are correct. 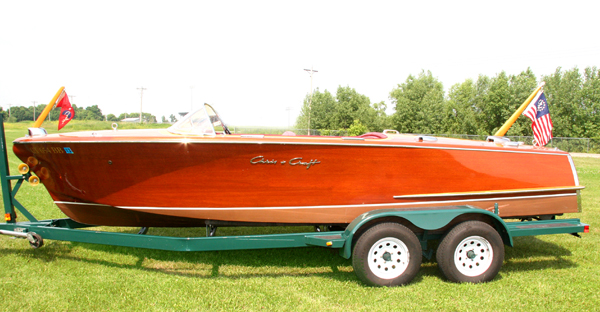 The compound curve at the bow, is referred to as a "bull nose." Also note the 26" Chris (star) Craft chrome logo on the hull sides. The water line on the 21' Capri was white, the bottom paint was copper-bronze. 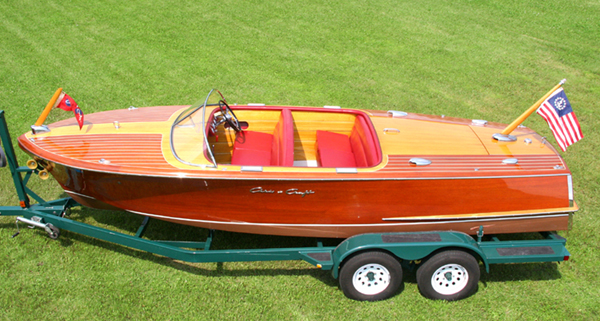 The splash rail wraps around from the side to the transom. The two chocks at the corners of the back deck are not original. This boat has all red upholstery, but originally the short dash board and the lower half of the seat back were upholstered with black alligator vinyl. Also, the seat bases under the cushions were alligator. Black alligator vinyl is still available today in a pattern that closely resembles the original. A chrome Chris-star-Craft logo was installed on the dash board of both the 1955 and the 1956 model. The white pyramid vinyl flooring continued up the kick panel of the cockpit. The transom of the 21' Capri was embellished with "Chris-star-Craft" and "CAPRI" chrome logos. The blonde area at the top of the transom is not a separate piece of wood, it is just stained a different color. A seam is routed around the blonde and filled with caulk to match the deck seams. See some bigger pictures of this 21' Chris Craft Capri here.